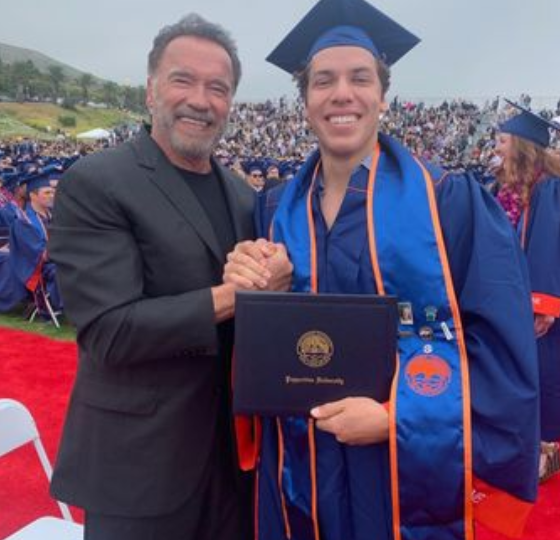 When Joseph Baena graduated from college, Arnold Schwarzenegger informed him that he would no longer be supporting him financially.

The 74-year-old Terminator actor supported his son’s college education, and Joseph expressed his gratitude for this.

However, after college, he told his son, “You’re on your own”.

Joseph, 24, is an aspiring actor and bodybuilder, but has entered into a different career to make ends meet.

He now has a job in real estate to allow him to support himself after finishing his studies. He works for the Los Angeles realty firm ARIA Properties.

Joseph told Unwaxed Podcast: “I needed a job, and I was not getting any of the acting roles that I thought I was going to get.

“I was like, ‘I need to do something’, so I started interning at this real estate company.”

He initially completed an internship with the company, hoping to learn as much as possible while earning money.

Joseph soon realised he enjoyed working in real estate and eventually got his license, allowing him to legally sell, broker, or rent real estate to prospective tenants and buyers.

Joseph said he still dreams of following in his dad’s footsteps and acting in big films while learning the trade.

He added: “I just love having a goal and then going for it.

“With acting, I know that my goal is to be a reputable actor and win some awards.”

Joseph is the son from Arnold’s affair with the Schwarzenegger family’s former housekeeper Mildred Baena. She was reportedly pregnant with Joseph at the same time Arnold’s ex-wife Maria Shriver was expecting their fourth child.