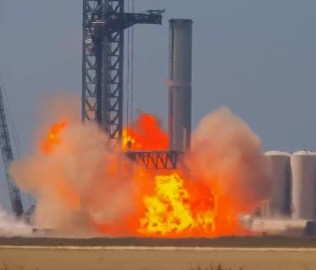 During a ground test firing in Texas, a booster rocket created by Elon Musk’s SpaceX for its next Starship spacecraft caught fire.

The Super Heavy Booster 7 prototype from a space business malfunctioned during a test on Monday, July 11, as witnessed in a livestream captured by the website Nasa Spaceflight.

“Yeah, actually not good. Team is assessing damage,” Musk said on Twitter after the early evening explosion of the Super Heavy Booster 7 prototype, as seen in a livestream recorded by the website NASA Spaceflight.

The explosion engulfed the base of the rocket in a ball of flames and heavy smoke and appeared to shake the video camera. However, there was no immediate indication of injuries.

“Going forward, we won’t do a spin start test with all 33 engines at once,” Elon Musk later said on Twitter, explaining that the issue was specific to the engine spin start test.

The booster was equipped with an array of 33 Raptor engines for use in an upcoming uncrewed orbital test flight SpaceX hoped to launch later this year.

The explosion is likely to setback Musk’s aim of launching Starship to orbit this year.