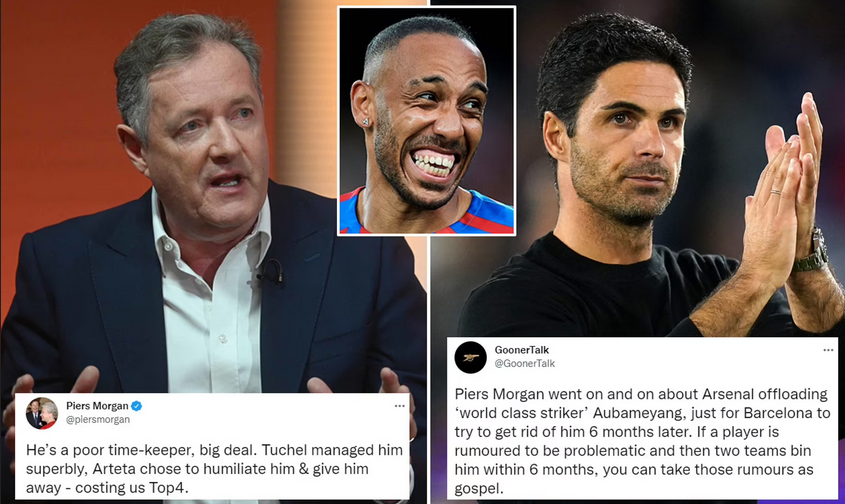 Piers Morgan has criticized Mikel Arteta, the head coach of Arsenal, for letting star striker Pierre-Emerick Aubameyang leave the team for Barcelona after their altercation earlier this year.

This occurs as Barcelona prepares to offload the Gabonese attacker this summer after just a brief stay of six months.

Reports suggest that Chelsea is interested in Aubameyang’s services, with Thomas Tuchel having worked with the 33-year-old during their time at Borussia Dortmund.

Twitter user @GoonerTalk reacted to the news of Aubameyang’s possible departure from the LaLiga club, alleging that the striker’s short time at the Nou Camp was evidence of an attitude problem.

They wrote: ‘Piers Morgan went on and on about Arsenal offloading ‘world class striker’ Aubameyang, just for Barcelona to try to get rid of him 6 months later. If a player is rumoured to be problematic and then two teams bin him within 6 months, you can take those rumours as gospel.’

Piers Morgan hit back at the claims, writing: ‘No reports of [Aubameyang] being anything but exemplary at Barca, and a goal machine. Now he may go to Chelsea, managed by Tuchel who managed him at Dortmund & loved him so much he wants to work with him again. So every part of this tweet is utter twaddle.’ 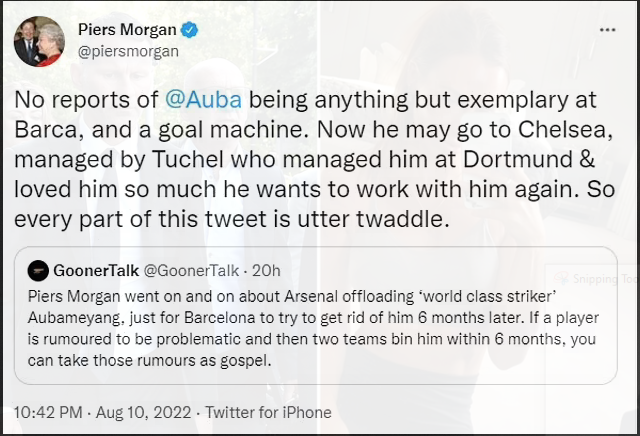 Morgan also replied to another tweet suggesting the player’s time-keeping shouldn’t be an issue.