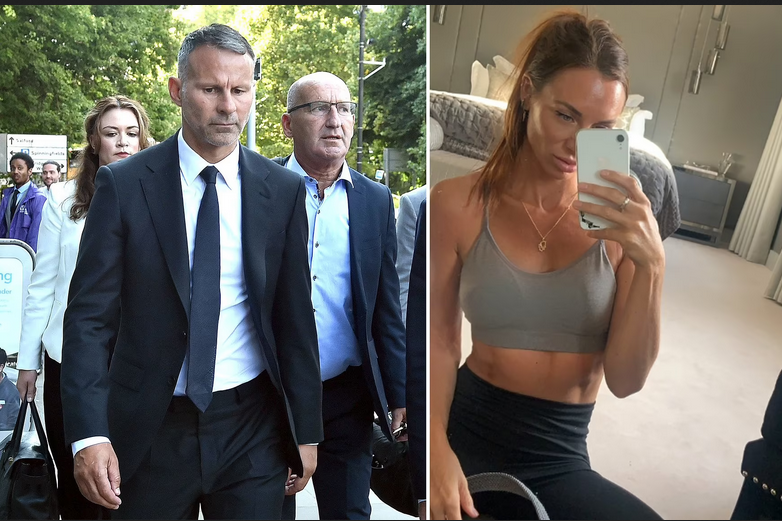 According to testimony given in court, Ryan Giggs’ ex-girlfriend Kate Greville delivered him their explicit videos weeks after accusing him of “blackmailing” her.

Giggs is accused of tossing Ms. Greville out of a hotel room while she was naked in an incident that happened in Dubai in 2017. This incident was previously described to the jury in the former Manchester United player’s domestic abuse trial.

Ms. Greville, 38, described the Wales manager ‘lovebombing’ her when their affair started. She said she saw him as her ‘knight in shining armour’ who would rescue her from an unhappy marriage.

But as time went on, Ms. Greville told Giggs’s trial, he became ‘two different people’, and by their final months together he was ‘pretty much relentlessly awful’.

Jurors had also been told how a friend of Ms Greville had noticed bruises on her arms following the alleged assault, which at the time she had dismissed as ‘sex bruises’. She later told the police the marks were the result of an assault, which Giggs denies.

But Chris Daw QC, representing Giggs, asked about a message from Ms Greville sent three weeks after the alleged incident in the Middle East.

The message read: ‘Good morning, babeeee. OMG this is amazing. Our sex is out of this world.’

It was followed by messages from Ms. Greville asking to meet him later that day, adding ‘it’s a long story’ but that one of her work colleagues had a problem with her ex-boyfriend who had hacked into her social media and police had been called.

Mr. Daw asked why was she asking Giggs about the harassment of a woman, if he was ‘such a terrible abuser of women’, as she claimed.

Ms. Greville replied: ‘Because at that point, it had not got to the point it had, not got the to extremities of what we discussed yesterday. It was gradual, it was subtle at that point it was not as bad as it was in 2019.’

By October 2017, Ms. Greville had agreed to come back from the Middle East to live in Manchester and work for the hospitality company owned by Giggs and his former team-mate Gary Neville.

She had a ‘six-figure’ salary from the firm and rented an apartment in central Manchester, returning to the UK in January 2018.

Mr Daw suggested previously the couple had a long-distance relationship but now the dynamic had changed.

Ms Greville has told the court she returned to the UK thinking she would be in a relationship with Giggs, but he instead became more distant.

Mr Daw said in January 2018, Giggs had to be interviewed for the job of football manager of the Wales national team and he therefore had a lot of work to do to prepare.

Ms Greville said: ‘The work situation was not the reason for him not paying me much attention. There was obviously other things going on in his life as well.’

The court heard the couple had reconciled in May 2019, but by then Giggs had deleted their sex videos.

He then messaged Ms Greville: ‘Do you still have our naughty videos?’
To which she replied she had ‘most of them’, before Giggs asked her to resend them to him, the court heard.

Mr Daw said to Ms Greville: ‘This is just six weeks after you say he was threatening to blackmail you with sex tapes?’

Ms Greville agreed and confirmed she had sent him ‘a number of such videos’.

Asked why she had sent them, she told the court: ‘Because we were back in a relationship.’

And on whether she had concerns that similar issues may arise between the couple in the future, Ms Greviile said: ‘I thought he had changed and he was in a different place. This was the same cycle of things. He promised he would change.’

Mr Daw QC also asked why she had not told her friend and business partner Elsa Roodt about the alleged assault in Dubai when asked.

Ms Greville, sat behind a curtain shielded from Giggs and the public gallery, said: ‘I was embarrassed and I didn’t want to admit it.’

Mr Daw said: ‘It was a bruise caused by rough sex that the two of you enjoyed a lot.’

Ms. Greville replied: ‘That bruise was not caused by rough sex.’
The court also heard how a few days after the alleged Dubai incident Ms. Greville messaged a photograph of herself to Giggs.

Mr. Daw added: ‘The truth of it is you did from time to time get bruises from sex.’ Ms. Greville said: ‘Not that I recall.’

Confirming that she had not reported the alleged assault to police in Dubai, she said: ‘No, I didn’t admit to the assault because I was embarrassed but I told Elsa we had argued.

‘I was later to work, visibly shaken and very upset which was evident that day. I tried to play down the bruising on my arm.’

Giggs is in on trial accused of controlling and coercive behaviour against his ex-girlfriend between August 2017 and November 2020.

He is also charged with assaulting Ms Greville and her sister Emma. He denies all charges against him and is on trial at Manchester Crown Court.