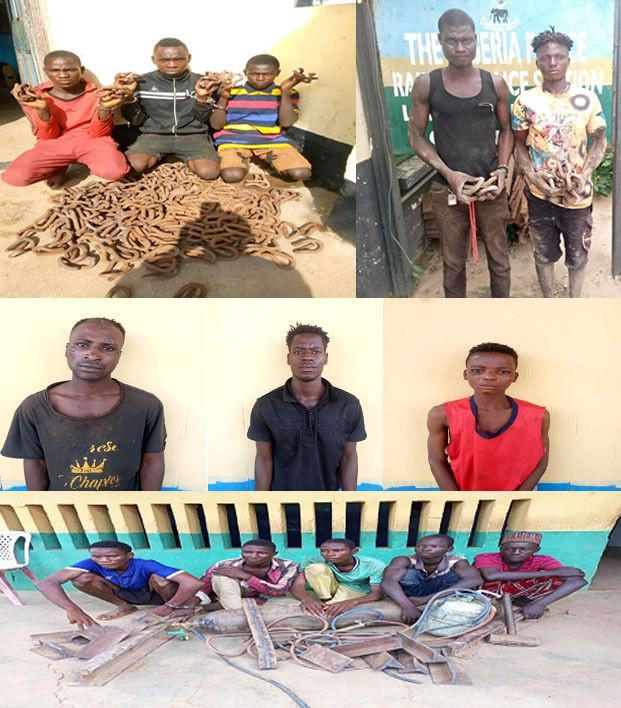 13 alleged rail track vandals have been taken into custody by agents with the Nigeria Police Railway Command in various regions of the nation.

The arrest of the offenders, according to CP Yetunde Longe, commissioner of the Railway Police Command, who confirmed the occurrence on Tuesday, July 12, was the consequence of the “constant endeavor to combat railway lines vandalism in all regions of Nigeria.”

“On 12th of May 2022, men of the Railway Police Command upon credible tip-off by a group of Civilian Joint Task Force arrested five suspected vandals in Abakwa axis of Kaduna state,” the statement read.

“They were intercepted while removing and vandalizing rail tracks of the Abakwa old rail line with a gas cylinder. The suspects are Abubarkar Ayuba, Musa Ibrahim, Umar Bello, Samaila Rabiu, Yahaya Abubakar,”

“The suspects, Benedict Matthew (20), Ismalia Ibrahim (18), and Abdullahi Iliyasu (20) were arrested on 17th of June 2022. Exhibits recovered from them include 10 sacks of vandalized standard gauge rail pandrol clip irons, a measuring scale, and a hammer.

According to the police, the suspects: Abdulrazak Abubakar, Khamisu Abba, Abdulganiyu Abubakar were arrested at kilometre 735, along Korota Village, Maikunkele Beji section.

“The truck with registration number BCH-933 XA belonging to Dangote Cement Company was loaded with 96 pieces of standard gauge rail irons. One suspect has been arrested in connection to the incident while investigations have been heightened to apprehend other accomplices at large.”

In another operation at Alagada village axis of Abeokuta, two men – Idowu Abiodun and David Titus both 24 years old – were apprehended by men of the Abeokuta division while vandalizing rail tracks.
CP Longe stressed the importance of citizen-police partnership and community policing in the securing of lives and properties.

The police boss added that no stone will be left unturned in the war against railway vandalism as perpetrators arrested will be made to face the wrath of the law to its full extent.