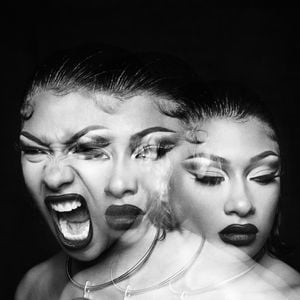 Traumazine is the name of Houston rapper Megan Thee Stallion’s sophomore album. The album was released on August 12, 2022 through 300 Entertainment and 1501 Certified.

On May 27, 2022, Megan trademarked the name “TRAUMAZINE” for legal use—namely in digital content that features music—which caused speculation about a potential new album name.

On August 4, 2022, these suspicions were proven to be correct when the rapper uploaded an Instagram post that resembled a dictionary definition and referred to traumazine as “the chemical released in the brain when it is forced to deal with painful emotions caused by traumatic events and experiences.”

The three singles “Sweetest Pie,” “Plan B,” and “Pressurelicious” were all released prior to the album announcement.